This past weekend you might have missed two news articles, one in the New York Times and the other in the San Francisco Chronicle, both of which touted the power and draw of architecture. Not a news flash for those of us in this profession, but certainly something that Joe Six-pack doesn't think about. The interesting aspect of the two articles was the fact that they came from completely different directions in the process of reinforcing the importance of design.

The easy article, about Herzog de Meuron’s de Young Museum in San Francisco, was on the front page of Sunday's San Francisco Chronicle. "Popular de Young Flourishes", by Julian Guthrie didn’t waste time in getting to the third paragraph and a reinforcing quote by Director John Buchanan:

"The building is a big part of the success. Its exterior. Its Interior. The tower. It all works. So we started with the great gift of the building." 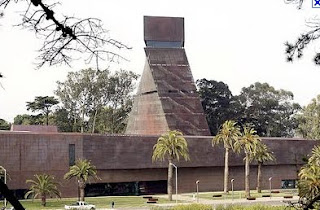 If anyone remembers the old de Young, and how dusty and sleepy it felt, this new-found success is staggering. Keep in mind that the aspect of the museum that changed is and was only the building - they didn't change the collection and they didn’t change the location. By changing the building only, the de Young has catapulted itself into the position of being the art museum with the fifth highest attendance in the United States. 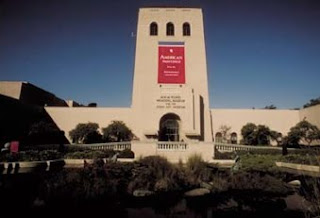 The harder article to de-code was an opinion piece in Saturday's New York Times Business section by Joe Nocera, titled "In Skyscraper at Ground Zero, Sentiment Trumped Numbers". You may recall the early iterations of something called the Freedom Tower at Ground Zero in New York. The project, nine years on, is now reaching skyward and the re-named 1 World Trade Center is now up to something like 20 stories. 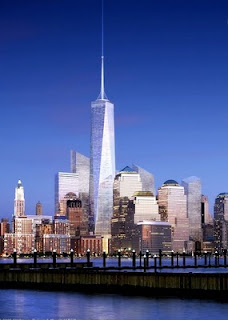 The interesting aspect of 1 World Trade Center is the economics of the project, and the underlying reasoning for it to be proceeding forward. The building currently has an assumed construction cost of $3.3 billion, which would make it the most expensive skyscraper ever built in the United States. More importantly, this price tag will make the rent structure required to pay for construction to be two times that of the equivalent office space in adjacent high rises, and one and a half times the rent of pricier and more attractive office space in mid-town Manhattan. 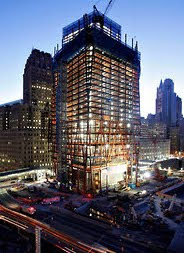 So, why would someone (or, in this case something - the Port Authority of New York) spend that kind of money? It comes down to the idea that architecture can embody ideas and ideals of society. In the words of one observer of this project, "You can only understand this as a political statement. It makes no sense as a commercial real estate endeavor." Which really begins to help you understand why the height of the building - 1,776 feet - was not coincidental.

Architecture counts. It counts in large amounts. It can count on a commercial level like it has for the de Young (even if they weren’t aware of this affect at the start of the project) and it can count on a sociological level like it has for Ground Zero. We need to reinforce this within our own offices, and we need to make sure that those outside the profession understand this.
Posted by MHA at 3:04 PM 2 comments: